Greatest gains come when MIM is used to form structures with properties not possible from plastics. It is essentially a three or four step process involving:

Most of the metal or ceramic powders used in MIM are between 1 and 40 µm. For comparison, human hair is typically 100 µm wide. The powder is mixed with a plastic binder. The typical ratio is about 80 vol. % powder, requiring then about 20 vol. % binders. Depending on the metal powder, a steel or stainless steel mixture constitutes about 94% powder by weight. The binders melt at relatively low temperatures to allow easy mixing and molding. The combination of powder and binder is termed feedstock, and feedstock is available from about a dozen suppliers and many firms also mix feedstock to their own specifications. SMP typically utilizes the BASF Catamold system due to their superior engineered feedstock compounding capabilities and highly consistent batch to batch properties.

The heart of production is molding, where the heated feedstock is shaped in a custom designed tool/mold. Prior to molding the powder-binder feedstock is heated inside the reciprocating screw of an injection molding machine to melt the polymer binder. The molding machine rapidly injects the molten feedstock mixture into the mold cavity to avoid any premature freezing. During this molding step the powder remains unaffected by the molten binder, since the peak temperature is far below the powder’s melting temperature. After injection into the mold cavity, the pressurized feedstock cools to solidify the polymer, thereby freezing the particles into the desired shape. Cooling is usually the slow step, so molding cycles can vary from 15 to in excess of 60 seconds dependent upon wall thickness. After extraction from the mold, the polymer portion is removed by heat, solvents, or catalysts without disturbing the shaped powder – a process known as de-binding. The final portion of the polymer decomposes while heating the shaped body to the sintering temperature.

Sintering is a particle bonding heat treatment that naturally densifies packed powders when they are heated to a temperature where atomic motion is active. For most powders, sintering starts well below the melting temperature. Besides considerable strengthening, one common result of sintering small powders is component densification; the sintered component is smaller than the molded component. Indeed, in MIM the final component is about 20% smaller in each dimension due to annihilation of the space initially filled with binder. The attached picture shows before and after images of a molded component to illustrate sintering shrinkage. After sintering there is no evidence of the initial powders or polymers. Thus, performance attributes of MIM products are comparable to properties cited in engineering handbooks. 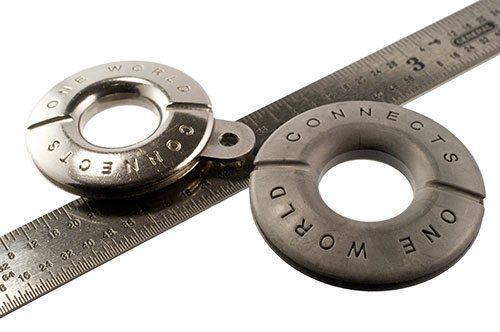