After ejection from the mold, the binder is removed from the component in a process called de-binding. Prior to de-binding it is common to call the molded part “green”. Binder extraction is a slow process that extracts the binder without disturbing the particles. Usually trace amounts of binder is retained to hold the particles in place until sintering starts. Once the debinding has been completed the parts are then called “brown” parts. Any final binder evaporates as the porous powder structure approaches the sintering temperature. A common de-binding cycle utilizing solvent or thermal de-binding may require 12 hours for the combined heating, hold, and cooling. During processing the components are placed on trays/setters to provide support and to enable transport. Sometimes custom setters are necessary to maintain flatness and/or dimensional stability during de-binding and sintering. 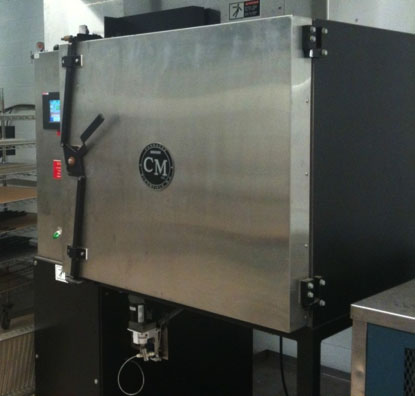 A wide variety of de-binding options exist, and selection of the best route depends on the binder system, component shape, and material. Thus, there is no single cycle or processing time. 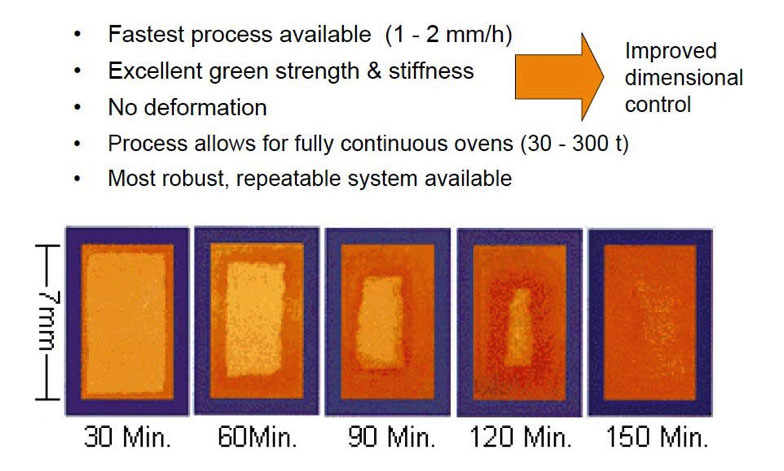 In de-binding, the erosion of the binder starts on the outside surface and works its way in. If the system is heated rapidly, then internal vapor pockets form and create blow holes, blisters, or even miniature volcanic eruptions. Generally, slow heating to 600°C (1112°F) over several hours in a protective atmosphere is most effective. The time for de-binding increases as the wall section thickness increases. For most metal powders and binders, a rule of thumb is that de-binding can penetrate about 2 mm per hour (0.08 inch per hour). Since the erosion is from both the front and back (or top and bottom) surfaces, the time for de-binding is approximated by considering the thickest half-section. For example, a wall that is 10 mm across requires heating at 1°C/min (1.8°F/min) to at least 450°C (842°F) with a hold of 2.5 h (5 mm divided by 2 mm/h) as long as both surfaces can be accessed during de-binding. This says that heating requires about 6 hours, with a peak hold of 2.5 hours, and about 6 to 8 hours of cooling time, so a 12 to 24 hour cycle is typical.