Some engineers confuse MIM with traditional press-sinter powder metallurgy (PM). The standard powder metallurgy forming step relies on vertical axis compaction to press a coarse powder into compact. The pressing route is the same as used to form pharmaceuticals pills. Die compaction is best at forming squat shapes that are easily ejected from the tooling. The ejection step requires the sides be parallel, a restriction in geometry not seen in MIM. Thus, in MIM undercuts and holes are possible perpendicular to the main axis, as illustrated by these MIM components. 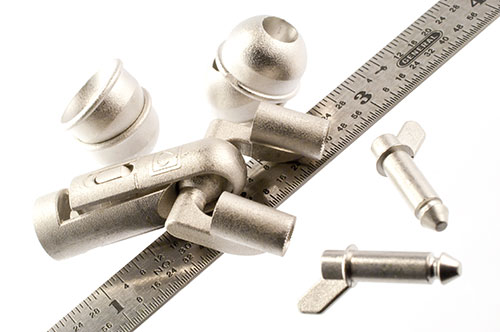 A major difference in the two technologies is in the final density and final properties. Because of friction between the powder and tooling, pressed powder is non-uniform. If sintered in a high temperature MIM sintering cycle, the component would warp, like a potato chip. Thus, PM parts are lightly sintered and retain considerable porosity and have significant property degradations.

A critical difference is in dimensional control. MIM components are formed with uniform density and the scatter in final component mass and dimensions is small. For PM the standard protocol is to use larger powders versus MIM and to sinter at lower temperatures for shorter times to avoid distortion during sintering densification, resulting in lower properties. As an example, MIM strengths are about two-fold higher than PM, fatigue strength is more three-fold that of PM, and impact toughness is eight-fold higher when compared to PM. Sometimes the marketplace also tells the story. While MIM is expanding rapidly, over the last ten years PM has seen significant contraction. Between year 2000 and 2011, North American press-sinter PM shrank by 20% while MIM has more than tripled.